October 29, 2017
It was a dark and cold night in the middle of 1933 when I was riding my horse near the old Guirola’s Estate. This night was foggier than I expected that I could barely see what was in front of me. I wasn’t sure what time it was when I heard the church of San Antonio clock rang and understood it was almost midnight.

Several myths surrounded the Guirola Family because they were extremely rich and powerful. They were part of an elite group called “The 14 Families” or the Coffee Oligarchy.

On my way back, I appreciated a spectacular light on the top of a hill not so far. It was in Guirola’s cottage when suddenly, a black rider reared his black horse. The view was crystal clear. It was the Black Knight (figure 1)! I used my spurs to make my horse faster than ever we needed to reach our house, we couldn’t stay here any longer! All legends say, “if the Black Knight caught you, you would not be able never to see the daylight again!” 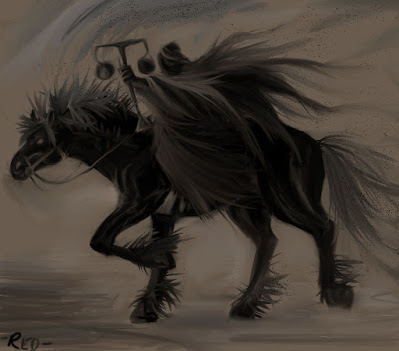 
I tried to force my horse to move faster, but it seemed something was stopping us. The soil looked different, and for every step, we advanced, we went three steps back. I was desperate, and I recalled there was an abandoned ranch not so far from here. We went there to spend the night.

The next morning, I had a terrible headache, and all my body hurt. Plus, my horse seemed affected too. We waited after midday to go back home.

When I arrived home, my wife was crying and shocked as if she had seen a ghost. She said, “the last night the Black Knight was seen and took one of the Guirolas with him. He was a good and humble man. I don’t understand why this happened, and you were not at home! I was scared he might have taken you too.” Suddenly, she hugged me as if there was no tomorrow.

Until that night, I was quite skeptical about this old legend. However, I wanted to know more about it, and I went to visit Mr. José, an old sergeant from the Salvadorian marine. He didn’t live far away, next to the San Salvador Volcano. Most people said he had lost his marbles after many fights in the pubs and wars, but I still thought he was a good man.

When I arrived, he was sharpening his machete in front of his house and said: “Hey Juan! Long time no see you, what brings you here?”

“Well, Mr. José, did you know what happened yesterday with Mr. Luis?” I asked him.

“Yes, Juan, unfortunately, his time came. It had been seven years since the last time he visited them. I felt shivers all over my body. So, what about you?” said Mr. José.

“Honestly, yes, yesterday I saw him while he was in their house and I ran away, now, I’d like to know more about him. Do you know anything?” I told him.

“Hmm,” Mr. José thought. “Well, it is an old story because he is the beast that lives in the underground, are you sure you want to know more?” he asked.

I said: “I would rather prevent, please tell me.”

“Okay, I will tell you what I know. Please take a seat.” Said Mr. José.

In all the rural areas like Santa Tecla, poverty has been significant since Columbian times. Many people suffered from different illnesses and problems. Some people wanted to grow faster in society because they were jealous of the wealth of the oligarchs and wanted to find an easier way to become as powerful as themselves. One night, one of these people was walking on the way back home when an elegant man in his black horse approached him and said: “Would you like a lift?”

The poor man said: “Sure, thank you.”

On their way back, the elegant man spoke to him for a while. He told him that he was a kind of magician and that he could provide him with anything he wanted, wealth, happiness, a beautiful wife, in fact, anything. He was very suspicious about his offer and asked: “Why would you help me if you don’t know me? What do you want?”

“Well, for sure I can give you a lot of things, and there is a small condition after seven years of prosperity, I’ll come back and take you with me to a new place. If you agree, I could give you everything that you wish and more.” The naive man said: “I’ll think about it.” After, the gentleman said: “If you agree, during the full moon you need to go to a lonely place, smoke a cigar, burn some chichipince incense, and say three times aloud: 'Mr. Black, come and give me all that I want!'”
After that, the elegant man left him at his home.
The following months were extremely tough. He lost everything because of El Niño. A massive dry season destroyed his small plantation and everything around El Salvador. No one had anything to eat.

The man got mad and desperate because he couldn’t find a solution to all his problems, his debts skyrocketed, and poverty was exacerbated in the city. However, one night, he remembered the Black Knight’s words. He meditated for a couple of days, but in the end, he couldn’t wait for more and just followed his orders and invoked him in a lonely place near a river during the blood moon, saying aloud three times: “Mr. Black, come and give me all that I want!”

Seven years later, all had changed in El Salvador, a Coffee Oligarchy had been born, and it was a prosperous time. The life of the man had been full of happiness, wealth, mansions, servants, and everything that he always dreamed of and more. He was part of this Oligarchy, but he had forgotten he had advocated the Black Knight.
One night, a man came back to his estate and requested his presence. When his servants described him, he was afraid of him, and instead of confronting him, he sent all his servants to protect him. However, the Black Knight is the true devil, and he simply broke through all of his servants and entered the estate and took his soul with him, becoming the first victim.

During the following years, more and more people made pacts with the Black Knight because their lives went wrong. As always, after they invoked and asked for help from the Black Knight. He appeared in a black whirlwind and showed up in front of them as an elegant rider dressed in black riding a powerful steed of the same color. A clear sign in all his appearances was the smell of burning bunch and sulfur. However, their ambition to recover everything was more powerful than the fear of negotiating their souls.

His real business, as you may have guessed, is to exchange people's souls for wealth, power, women, happiness, everything you want in life. However, the curse is not only for the person who invoked him. The curse extends to the next three generations, which would be healthy, and their misfortune would continue.

Thanks for your worthy knowledge, Mr. José, I will be more careful since this day every night.