April 25, 2018
Long ago, a tall, white, and good-looking man appeared from nowhere on a cold night, along the cobbled streets of Zacatecoluca. He had a lonely and melancholic air and resided in a tiny cabin. He claimed to be Rafael María Guirola.

Mr. Rafael was born in Spain and became a successful businessman in El Salvador, where his first businesses were related to trading. He got married to Gertrudis de la Cotera y González, of Spanish descent, and from their marriage in 1826 was born Ángel Guirola de la Cotera.

Ángel was sent by his family to study for his bachelor’s degree in Guatemala City. After his graduation, he worked for a couple of years in one of the largest pharmacies there, owned by Mr. Pío Porta.
In 1844, Ángel returned to El Salvador, where he spent his savings and acquired some loans to buy a few lands that he dedicated to the cultivation of indigo. He showed a great ability to export this product and extended his business throughout the Caribbean, Panama, and the United States of America.
Over the years, the Guirola Family expanded their businesses from indigo to coffee and cotton. They were also the first merchants of accessories and fabrics brought from Europe. They sold everything you can imagine, for example in the Official Journal on January 1st, 1879, they advertised:
“In Mr. Ángel Guirola’s house in Santa Tecla the following items are sold wholesale and retail: good and old coffee; golden galleries, French and English genres for curtains; tassels for said curtains; patent leather goods for folders and other uses; flat, white and colored glasses, doll models, painted metal sinks, letter envelopes, and groceries; Castilla wax in loaves of 1 and 25 pounds; olive oil all packaging, castor and almond oil in small bottles, sweet and dry wines, champagne, fine and ordinary cognac, oil paints, zinc sheets, hoes, country imitation brakes, iron chains for mules and horses, revolvers, two-caliber shotguns, rifles and ammunition, tarpaulin covers for cars, white bibs for shirts, white nightgowns, and fat cattle.”
They without a doubt started multiple business revolutions in El Salvador. Many people believe they began the rise of the coffee business because it became their flagship export product, and where most of their wealth came from.

Everything seemed picture-perfect, but in 1858, something intriguing happened, Ángel got married in New York to a wealthy Jamaican woman, Cordelia Duke Alexander. The gossip said that she knew how to perform supernatural rituals from beyond; commonly, practiced in her Caribbean region. Some of those rituals were about making deals with wicked spirits. Cordelia was the person, who according to the legend, encouraged Ángel to make his famous deal with the devil.

Rumors spread like wildfire around the country about his deal with the devil. Especially after, some uncommon guests started visiting their house at very late hours like a gentleman dressed in black riding a black horse. On those nights, people who used to live in the surroundings saw mysterious lights, heard inexplicable noises, and thus, all the paraphernalia about them was born.

Some tittle-tattles said that Ángel’s deal with the devil is as follows:
“Ángel will get all the fortune and youth that he has dreamed for him and his family in exchange for his soul and the next seven generations. Plus, to retain their wealth, each new generation needs to sacrifice one child in the devil’s name.” (Figure 1)

Figure 1. An old photo of the Guirola Family. ¹


Without a doubt, many people suspected the origins of his fortune. They assured if you wanted to be as wealthy as Ángel you had to go to a lonely place at night, smoke a cigar, say a few special prayers, burn a particular incense, and invoke the devil. After he appeared, you would reach your deal.
Ángel had an incredible solid business acumen and possessed uncountable properties and investments around El Salvador that no one could explain how this had happened overnight. His peasants, who frequently changed some pronunciations and people’s names, referred to Mr. Guirola as Mr. Virola. Until today, the Guirola Family has a peculiar nickname in Zacatecoluca: “The Viroleños.”

The Guirola Family relocated to Santa Tecla in 1866 and quickly became distinguished members of society because they practically owned everything: lighting, water, public transport, forest trees, and the animals that lived in it. Additionally, the next generations of this family continued to profit from their significant wealth and allowed them to join an exclusive club of feudal lords called “The 14 Families.” These families ruled El Salvador for decades.

In the same year, they completed their splendid mansion in Santa Tecla. It evoked the Parisian ones. On its top had two eagle statues erected, seeming to majestically guard the entire city. The residence was called The Eagles Mansion (figure 2) for this reason. On it, the Guirola Family organized exclusive parties where they drank some concoctions mixed with bats’ blood and fine European liqueurs. 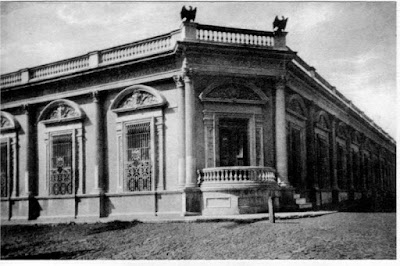 
Some of the people who attended their exclusive parties shared that one of the members had a room lined with silver coins, and on the roof of it, there was a symbol resembling a goat.

Others said the Guirola Family sacrificed beautiful maidens from time to time. Plus, many beautiful women affirmed, that the family subjected the Godmothers of Wakening to all kinds of sexual practices, and after, no one ever saw them again.

Moreover, one Guirola used to walk around Santa Tecla dressed entirely in black suits. During these walks, a dozen enormous black dogs accompanied him. These dogs were unique because the family ripped out their fangs and replaced them with new ones of pure gold. Paradoxically, in the 2000s, some people swear they have seen these beautiful dogs chained to some trees behind their former cottage (figure 3) in the El Paraíso neighborhood. 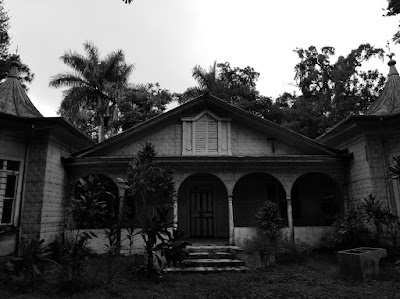 
This cottage is considered one of the most splendid pieces of art in El Salvador. It contains Victorian architecture, and each of its six rooms has a unique European style, including Italian, French, and Spanish. However, people who live in the surroundings of it said it’s haunted because they have experienced paranormal events such as,

Incredibly, multiple stories keep surrounding this family even in the 2000s, despite their power and influence have significantly faded over the generations; especially, after the Salvadoran Civil War at the beginning of the 1990s. One of their last mansions (figure 4) located in the Las Colinas neighborhood surprisingly survived an earthquake in 2001 almost intact, when hundreds of houses next to it were buried because of a landslide. Many people believe the mansion moved from its original location and over the following years, they visited it and shared unrealistic experiences, e.g.,

Figure 4. The mansion is located in the Las Colinas neighborhood. ³
Even today, a few old Salvadorans swear some family members never aged, but because of their deal, their life was full of tragedies. Unfortunately, many of its members died in mysterious accidents that no one can explain until today, which expanded and reinforced the narrative of their deal.

Obviously, many people expanded their difficult journey through popular stories. However, most of them came from classical literature such as Goethe’s Faust, Dracula, Bluebeard, and The Picture of Dorian Gray.
The truth is that Ángel Guirola was a good and honorable man. A philanthropist who pioneered agriculture. Furthermore, he was a deputy and vice-president of El Salvador, and briefly, he held the presidency during Dr. Rafael Zaldívar’s administration in 1884.
Ángel was an untiring man, who after his career as a politician, carried on his businesses. In 1885, he founded a bank called “Banco Particular de El Salvador” in collaboration with Messrs. J. Maurice Duke, Francisco Camacho, Emeterio S. Ruano, JM Alexander, and others. In 1891, the bank got a new name Banco Salvadoreño.
Later on, between March and June 1885, Ángel mediated during General Justo Rufino Barrios’s invasion and the revolution led by General Francisco Menéndez. After General Menéndez’s triumph, he traveled through the USA and Europe.
However, little by little, the Guirola Family lost its economic and social power, mainly when coffee cultivation began to decline, and crises such as the Great Depression of 1929 hit El Salvador’s economy badly. Nonetheless, everyone can appreciate their legacy until today because they donated multiple significant properties in Santa Tecla such as,
Inspired by “La extraña leyenda de una familia” and “La 'Mansión Guirola' y la historia de la enigmática familia” of El Diario de Hoy by Marvin Galeas and Nancy Hernández. © All rights reserved 1999 - 2020.