September 03, 2018
The oldest people of the town of Apaneca always said that many years ago, when the streets were some dirt and other cobblestones, at midnight every year a horseman, who was riding all over El Salvador came to the city. That horseman dressed in black rode a horse of the same color (figure 1), which fired fire from his eyes and blew smoke from his jaws when it snorted. 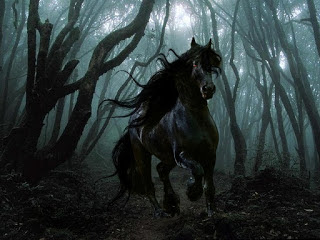 
This mysterious rider left in the direction of the coffee plants where the oligarchs used to live when the Black Knight arrived at their houses, he forced his horse to dance for several minutes. The only noise that you could hear was his hooves when they were hitting stones. The savage neighing that was emitted by the horse from time to time scared all the neighborhood.

All people were afraid when the Black Knight arrived because all legends say he returned to take a new soul to hell. However, people were more afraid of his horse. They said the horse rode alone in the city without him. It trotted through the streets of the town, causing the terror of its inhabitants. On some occasions, they only heard the sound of horses’ hooves. Nevertheless, they couldn't see the animal. It became invisible, which frightened the inhabitants even more.

People began to murmur that it was the devil’s horse and appeared in their streets just to terrify them. The elders said that Santa Tecla suffered a terrible war many years ago. In this war, the horse was the only survivor when the Conquistadors murdered its horseman.

The horse only sought revenge for many years. One day, a Black Knight approached it and made an offer it couldn’t refuse. He offered to become an immortal creature. Also, he would ride it every year to the place where his horseman died. In addition to new powers like invisibility and an unforgettable neigh! He would frighten all the people in the town! He gave it a second chance to take revenge! This is how the new alliance was forged.
The devil’s horse is always angry and believes no inhabitants respect their past. Everyone who dies without a confession or is buried lacking the blessing of a priest, it takes care of them. The horse believes, these sinners belong to hell with its new master!

One day, some elders gathered in the church of Saint Andres Apostle. They asked the priest for help to escape from the devil’s presence once and for all. The priest called an old exorcist from San Salvador who came that night to expel its presence. He blessed the place with several liters of holy water, and little by little, the apparitions of the accursed horse began to cease, till one day, it vanished forever. However, the horse is still waiting for its return and takes care of those who expelled it. Be careful because its savage neighing is unstoppable!